Preexposure prophylaxis (PrEP) with a daily, oral pill containing antiretroviral drugs is highly effective in preventing acquisition of human immunodeficiency virus (HIV) infection (1–4). The combination of tenofovir disoproxil fumarate (TDF) and emtricitabine (FTC) is the only medication approved by the Food and Drug Administration (FDA) for PrEP. PrEP is indicated for men and women with sexual or injection drug use behaviors that increase their risk for acquiring HIV (5). CDC analyzed 2014–2016 data from the IQVIA Real World Data — Longitudinal Prescriptions (IQVIA database) to estimate the number of persons prescribed PrEP (users) in the United States and to describe their demographic characteristics, including sex and race/ethnicity. From 2014 to 2016, the annual number of PrEP users aged ≥16 years increased by 470%, from 13,748 to 78,360. In 2016, among 32,853 (41.9%) PrEP users for whom race/ethnicity data were available, 68.7% were white, 11.2% were African American or black (black), 13.1% were Hispanic, and 4.5% were Asian. Approximately 7% of the estimated 1.1 million persons who had indications for PrEP were prescribed PrEP in 2016, including 2.1% of women with PrEP indications (6). Although black men and women accounted for approximately 40% of persons with PrEP indications (6), this study found that nearly six times as many white men and women were prescribed PrEP as were black men and women. The findings of this study highlight gaps in effective PrEP implementation efforts in the United States. 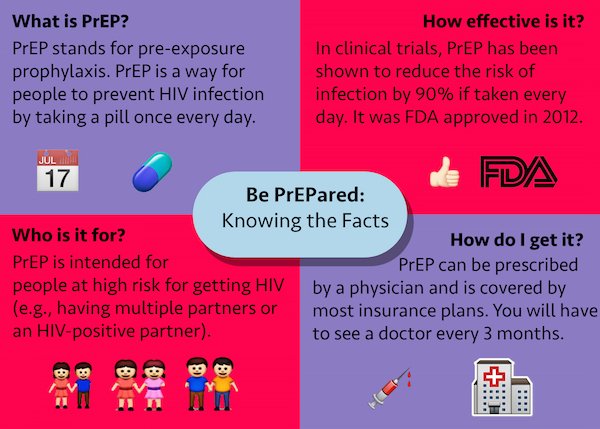 In 2012, FDA approved TDF/FTC for use as PrEP (7), and CDC published clinical practice guidelines for use of PrEP (5). A previous study estimated PrEP uptake among U.S. commercially insured populations and found that PrEP use increased among men during 2010–2014, but was very low among women (8). It is important to monitor PrEP uptake both among persons with private and public insurance. Because racial and ethnic disparities in HIV diagnoses exist in the United States (9), it is also important to better understand PrEP use by race/ethnicity. Monitoring trends in PrEP use can inform the development of interventions to ensure that PrEP is provided for persons who need it most to reduce racial and ethnic disparities in PrEP use and new HIV infections.

Data on antiretroviral drug prescriptions dispensed during 2014–2016 were extracted from the IQVIA database,* which captured prescriptions from all payers and represented approximately 92% of all prescriptions dispensed from retail pharmacies and 60%–86% dispensed from mail order outlets in the United States. The database included antiretroviral drugs dispensed, demographic variables of persons to whom the drugs were dispensed, and medical claims for these persons. IQVIA acquired medical claims and race/ethnicity data from various sources, including ambulatory, hospital, and consumer databases, and linked these data to persons in the prescription database. Among persons with any antiretroviral drug prescription (1,418,621), approximately 69% had medical claims data available, and race/ethnicity information was available for about 32%. CDC estimated the annual number of PrEP users based on a previously developed algorithm that discerns whether TDF/FTC was prescribed for PrEP or for HIV treatment, hepatitis B treatment, or HIV postexposure prophylaxis (8). For each year of the study, records of persons aged ≥16 years who had at least one TDF/FTC prescription were selected. Persons were then excluded if they had any diagnostic codes for HIV or hepatitis B infection that preceded their initial TDF/FTC prescription. In addition, persons prescribed TDF/FTC for ≤30 days were defined as postexposure prophylaxis users and excluded; the remaining persons with TDF/FTC prescribed for >30 days were considered PrEP users. Postexposure prophylaxis is recommended for 28 days; however, it is often prescribed for 30 days. The 30-day definition of postexposure prophylaxis was chosen to produce conservative estimates of TDF/FTC for PrEP. PrEP use among persons prescribed TDF/FTC for >28 days was also estimated, to assess the impact of different duration of drug use on the estimates. PrEP use estimates were reported by age group, sex, geographic region, payer type, and race/ethnicity. Payer type was estimated for each person prescribed PrEP using a payer hierarchy of Medicaid, Medicare, commercial insurance, cash, and other payers. The number of PrEP users who received medication assistance program benefits from the manufacturer of PrEP also was estimated.