by Sari Horwitz and Scott Higham 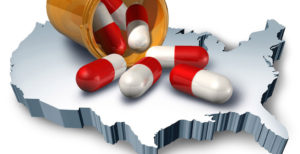 Dozens of medical professionals in five states were charged Wednesday with participating in the illegal prescribing of more than 32 million pain pills, including doctors who prosecutors said traded sex for prescriptions and a dentist who unnecessarily pulled teeth from patients to justify giving them opioids.

“That is the equivalent of one opioid dose for every man, woman and child in the five states in the region that we’ve been targeting,” Brian Benczkowski, an assistant attorney general in charge of the Justice Department’s criminal division, said in an interview. “If these medical professionals behave like drug dealers, you can rest assured that the Justice Department is going to treat them like drug dealers.”

The charges include unlawful distribution or dispensing of controlled substances by a medical professional and health-care fraud. Each count carries a maximum 20-year prison sentence, and many of the defendants face multiple counts. One doctor in Tennessee is charged in connection with an overdose death caused by opioids, officials said.

The indictments are part of a broader effort by the Justice Department to combat the nation’s prescription pain pill epidemic, which claimed the lives of nearly 218,000 Americans between 1999 and 2017, according to the Centers for Disease Control and Prevention.