Designer Opioid Not Yet Illegal

A new synthetic opiate may be contributing to the addiction crisis, showing signs of penetrating new markets, according to those who have followed it.

Isotonitazene has been detected in the blood of people who died of overdoses in Illinois and Indiana, where it was mixed with cocaine. It was also found during a drug raid late last year on Canada’s eastern seaboard, according to reports.  The drug comes in a white or off-white powder form or pressed into counterfeit opioid pills.

Dr. Lakshmi Sammarco, the Hamilton County, Ohio, coroner, said she was aware of the relatively new drug and plans to get a standard test for it so that it can be added to toxicity screens for those who die from overdose in the county.

“We only see what we test for,” Sammarco said. “We’re going to start looking for it. We will probably look back at some overdose deaths to see whether it was present.” 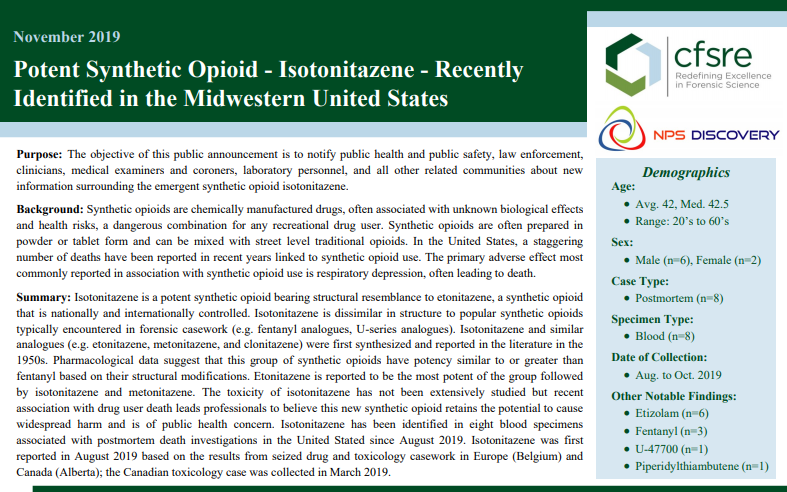 Illinois’ Peoria County coroner Jamie Harwood said this week that isotonitazene was detected in an overdose death from December in his county after a toxicology screen came back with no matches to known opioids. He knew from the individual’s background and the apparent circumstances of death that the person had a history of substance use disorder.

“We didn’t have a cause of death,” Harwood said. “It didn’t show up on a normal tox screen.”

The coroner’s team did an expanded toxicity screen to try to find out how the person died, and that’s when the new opioid showed up.

“We probably will see it again,” Harwood said.

Isotonitazene is not a fentanyl analog, the powerful synthetic opiates that have been plaguing Ohio and Kentucky and other parts of the United States during recent years of the opioid epidemic.

Derivatives of the drug have been sold online and appear to be entering the United States from the international community, said Dr. Mina “Mike” Kalfas, a northern Kentucky addiction specialist.

“It might be here; we just don’t know,” Kalfas said.

Isotonitazene is derived from etonitazene, a powerful analgesic opioid first identified in the 1950s that is explicitly illegal, Sammarco said. The new one isn’t yet on the U.S. Drug Enforcement Administration’s controlled substances list. That means it’s not illegal.

And like with any opioid use, addiction treatment and harm reduction experts recommend people not use the drug alone and carry naloxone, the opioid overdose antidote. But some reports say that the potency of isotonitazine may require more than a usual dose of naloxone to restore breathing.

A nonprofit news organization called Pain News Network reported in March that police in Halifax, Nova Scotia, seized 1,900 white tablets from a home in February and sent them to Health Canada for analysis, which confirmed the tablets were made with isotonitazene.