Drug- and alcohol-related deaths up in Maryland

From the Baltimore Sun

Drug- and alcohol-related deaths across Maryland jump more than 9% due to the coronavirus, officials say

As the coronavirus continues to claim the lives of Marylanders every day, state officials said Tuesday that fatal drug overdoses and alcohol-related deaths also are increasing throughout the region.

New state data released Tuesday revealed drug- and alcohol-related deaths increased 9.1% across the state from January to June this year compared with the same months of 2019, with opioids responsible for nearly 90% of the 1,326 deaths. The report reflects the anticipated impact of the pandemic for the first time.

The Maryland Department of Health and the state’s Opioid Operational Command Center said it’s “clear” that COVID-19 is responsible for the uptick, exacerbating people’s addictions as they’ve quarantined inside their homes to help curb the virus.

“Taken together, the associated social isolation, disruptions of support, impeded access to care, and economic distress have helped to create an extremely dangerous environment for those suffering from substance use disorder,” the report said.

The report also noted an increase of alcohol- and cocaine-related deaths and a decrease in emergency room visits for nonfatal opioid overdoses, also believed to be a result of the pandemic. 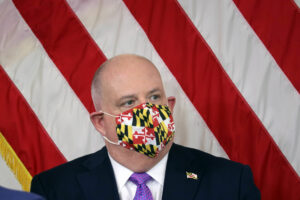 Maryland Gov. Larry Hogan said the state, much like the rest of the country, has faced “daunting” challenges with substance abuse since the beginning of the year, but officials have acted “quickly” and “proactively.” He touted the creation of the Maryland COVID-19 Inter-Agency Overdose Action Plan to interdict the link between substance abuse and the pandemic.

“From the beginning of my administration, I have offered the full support of my office and the resources of every agency in the state to solve this problem, and this plan provides the framework for us to do that right now,” the Republican governor said in a news release. “In spite of the other challenges that we face, our dedication to reversing the devastation of the opioid crisis has not wavered.”

Fentanyl, a powerful synthetic opioid that has replaced much of the street heroin, accounts for most of the opioid deaths. There were 1,100 fentanyl-related deaths in 2020′s first six months, an increase of 11.9% compared with the first half of last year, the report said. Fentanyl contributed to 83% of the intoxication-related deaths.

Health officials have spent millions of federal and state dollars to reduce opioid-related overdoses, which have claimed more than 2,000 Marylanders in each of the past three years. They widely distributed the overdose antidote naloxone and trained people to use it. They set up hotlines and sought funding for more treatment. Baltimore City opened a sobering center to divert people from hospital emergency departments and jails.

Dr. Michael Fingerhood, who treats substance use disorders at Johns Hopkins Bayview Medical Center, said the increase doesn’t come as a surprise because so many people were unable to receive or seek treatment during the beginning months of Hogan’s stay-home-order enacted March 30. Nearly all in-person substance abuse meetings were canceled and it was difficult to reach new patients who may have been trying to seek help because of limited appointments, Fingerhood said .

“A lot of 12-step meetings were places for people to walk in and say they need help,” he said. “And most patients who need them don’t have the ability to get to a Zoom 12-step meeting.”

Although the increase was expected, the associate professor of medicine and public health at the Johns Hopkins University said he finds the increase of suburban-area opioid deaths “troubling.”