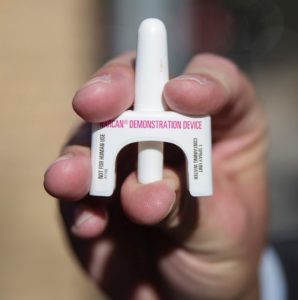 The U.S. Food and Drug Administration today granted final approval of the first generic naloxone hydrochloride nasal spray, commonly known as Narcan, a life-saving medication that can stop or reverse the effects of an opioid overdose. The agency is also planning new steps to prioritize the review of additional generic drug applications for products intended to treat opioid overdose, along with the previously announced action to help facilitate an over-the-counter naloxone product.

“In the wake of the opioid crisis, a number of efforts are underway to make this emergency overdose reversal treatment more readily available and more accessible. In addition to this approval of the first generic naloxone nasal spray, moving forward we will prioritize our review of generic drug applications for naloxone. The FDA has also taken the unprecedented step of helping to assist manufacturers to pursue approval of an over-the-counter naloxone product and is exploring other ways to increase the availability of naloxone products intended for use in the community, including whether naloxone should be co-prescribed with all or some opioid prescriptions to reduce the risk of overdose death,” said Douglas Throckmorton, M.D., deputy center director for regulatory programs in the FDA’s Center for Drug Evaluation and Research. “All together, these efforts have the potential to put a vital tool for combatting opioid overdose in the hands of those who need it most – friends and families of opioid users, as well as first responders and community-based organizations. We’re taking many steps to improve availability of naloxone products, and we’re committed to working with other federal, state and local officials as well as health care providers, patients and communities across the country to combat the staggering human and economic toll created by opioid abuse and addiction.”

Today’s approval is the first generic naloxone nasal spray for use in a community setting by individuals without medical training; however, generic injectable naloxone products have been available for years for use in a health care setting. The FDA also has previously approved a brand-name naloxone nasal spray and an auto-injector for use by those without medical training. While business and other considerations may impact how quickly this product becomes available, today’s approval is an important step for the agency as it works toward expanding access to this live-saving drug. The FDA also held a two-day advisory committee meeting in December to solicit input and advice on strategies to increase the availability of naloxone products intended for use in the community.

According to the Centers for Disease Control and Prevention, almost 400,000 people died from an opioid overdose from 1999 to 2017, and on average, more than 130 Americans die every day from overdoses involving opioids, a class of drugs that include prescription medications such as fentanyl, oxycodone, hydrocodone and morphine, as well as illegal drugs such as heroin or drugs sold as heroin. Drugs like heroin often contain fentanyl or derivatives of fentanyl. When someone overdoses on an opioid, it can be difficult to revive the person to full consciousness, and breathing may become shallow or stop completely – leading to death without medical intervention. If naloxone nasal spray is administered quickly, it can counter the overdose effects, usually within minutes. However, it is important to note that it is not a substitute for immediate medical care, and the person administering naloxone nasal spray should seek further immediate medical attention on the patient’s behalf.

As part of the U.S. Department of Health and Human Services’ ongoing efforts to combat the opioid crisis and expand the use of naloxone, in April 2017, the Department announced its 5-Point Strategy to Combat the Opioids Crisis. Those efforts include: better addiction prevention, treatment, and recovery services; better data; better pain management; better targeting of overdose reversing drugs; and better research. In April 2018, Surgeon General VADM Jerome Adams issued an advisory encouraging more individuals, including family, friends and those who are personally at risk for an opioid overdose to carry naloxone. In December 2018, ADM Brett P. Giroir, M.D., Assistant Secretary for Health and the Secretary’s Senior Advisor for Opioid Policy, released guidance for health care providers and patients detailing how naloxone can help save lives.

One of the ways the FDA is working to increase access to this life-saving treatment is through the approval of generic naloxone products. As part of HHS’ public health emergency to address the ongoing opioid crisis, the FDA will grant priority review to all abbreviated new drug applications for products indicated for the emergency treatment of known or suspected opioid overdose. As part of the priority review, sponsors will receive shorter goal dates or standard goal dates with earlier reviewer deadlines; enhanced agency communication with sponsors; and expanded agency engagement similar to Generic Drug User Fee Act enhancements for complex products, such as pre-submission and midcycle meetings. The FDA has determined that further expanding availability of and access to overdose reversal drugs could help address the public health emergency.

More generally, in an effort to promote competition to help reduce drug prices and improve access to safe and effective generic medicines for Americans, the agency is taking a number of new steps as part of its Drug Competition Action Plan. These steps include important work to improve the efficiency of the generic drug approval process and address barriers to generic drug development.